* Please remember to bring in reading books and home/school diaries every day.

*  If you have music lessons, please remember your violin or cello every Tuesday.

* Football with Arj is on a Wednesday lunchtime. Please bring football kits to school to change into.

* Learning at Home books should be returned on a Thursday and new work will be given out on a Friday.

* Our P.E. day is a Friday. Please ensure that ear rings are removed.

* Water bottles should be brought in to school every day.

* Our swimming lessons are on Tuesday afternoons.

In May, year 4 have been learning all about living things and their habitats and rainforests. They explored grouping living things in different ways and using classification keys. The children visited Backhouse Park and looked at the different trees, and tried to identify which tree it was by looking at it’s leaves. We looked carefully at the colour, shape and any special features that they had. The children have also been learning all about the layers of a rainforests and deforestation. The children were able to label the different layers of the rainforest and create a fabulous flip booklet. The booklet showed important information about each layer and the plants and animals that live within each layer.  The children were able to research about deforestation and the impact it has on the environment including the animals that live there. 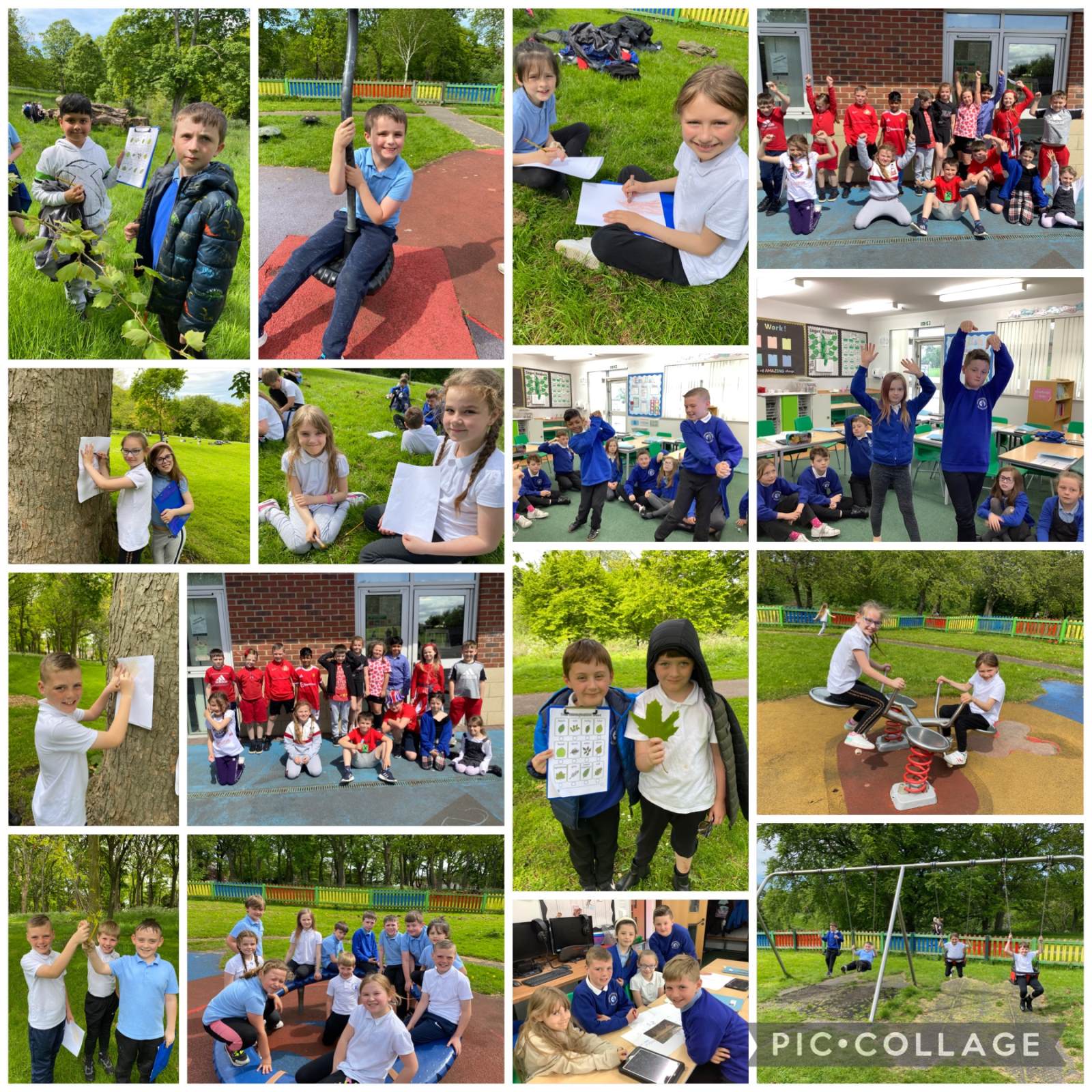 In April, the year 4 children have been learning all about circuits in Science. They really enjoyed investigating to construct different circuits. They had the opportunity to fins and test how to use a number of different components including bulbs, buzzers and motors. They made a circuit with different numbers of cells and bulbs to see if there were any differences and used their circuits in light boxes that they had made as part of their Design Technology lessons. They used different switches and made their own switches using their understanding of materials that are conducts and materials that are insulators. Within some of the Design Technology lessons, the children also learned how to create a moving mechanism using inputs and outputs with cards and split pins. ‘Multiplications mornings’ have started where children and parents/carers are invited in to class from 8.30am each Wednesday morning. There are times tables games, computer activities, multiplications colouring and a selection of worksheets for the children to practise their times tables. The children have also been working on fractions in mathematics and completed a fraction investigation with smarties. 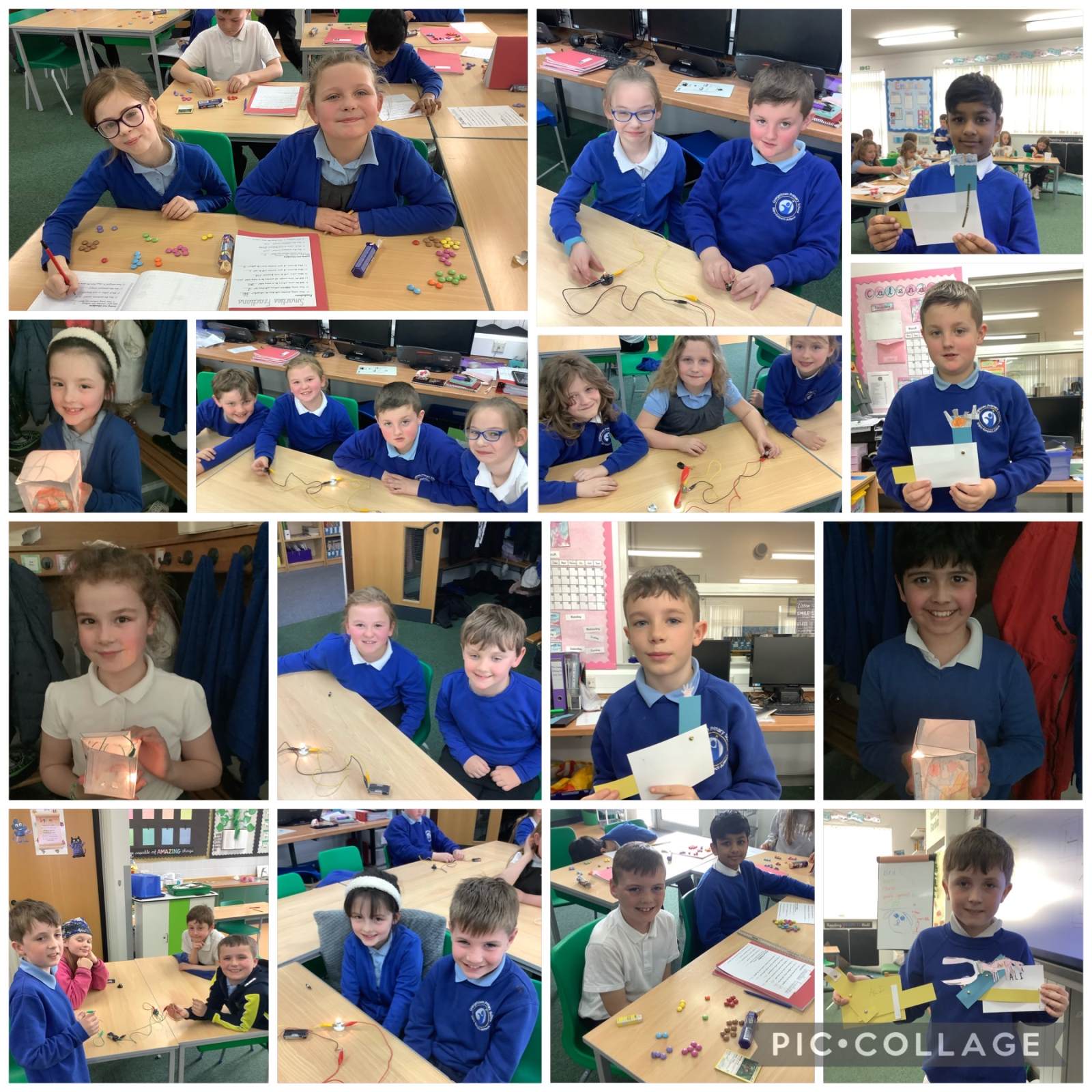 Year 4 visited the Holy Trinity Church as part of the Hidden Stories project: 300 years of Sunderland. The children started their day by having a tour of the amazing church and discovered some of the mysteries within the building. They were able to explore some of the artefacts that were found in the building and surrounding area including address books, registers and keys. They also watched a live performance from a professional string quartet that played music from across the 300 year period. In March, to help celebrate World Maths Day, the children came to school dressed in an outfit which had a number, a shape or their favourite colour so that they could take part in some maths activities throughout the day. In class, we found the area of our name by counting the squares. We read the book 'Just a Second' by Steve Jenkins and then predicted and tested ourselves to see what we could so in a minute, including making star jumps and building towers. The children also had the opportunity to use mathletics to challenge children in their mental maths from around the world. The children also celebrated Word Book Day. They decorated their own white t-shirt using their favourite book for inspiration. The children took part in a class swap where they were able to pair up with some children from Year 1 and share a story. The children had been reading The Iron Man by Ted Hughes and performed a fantastic poem linked to the story by Brenda Williams. 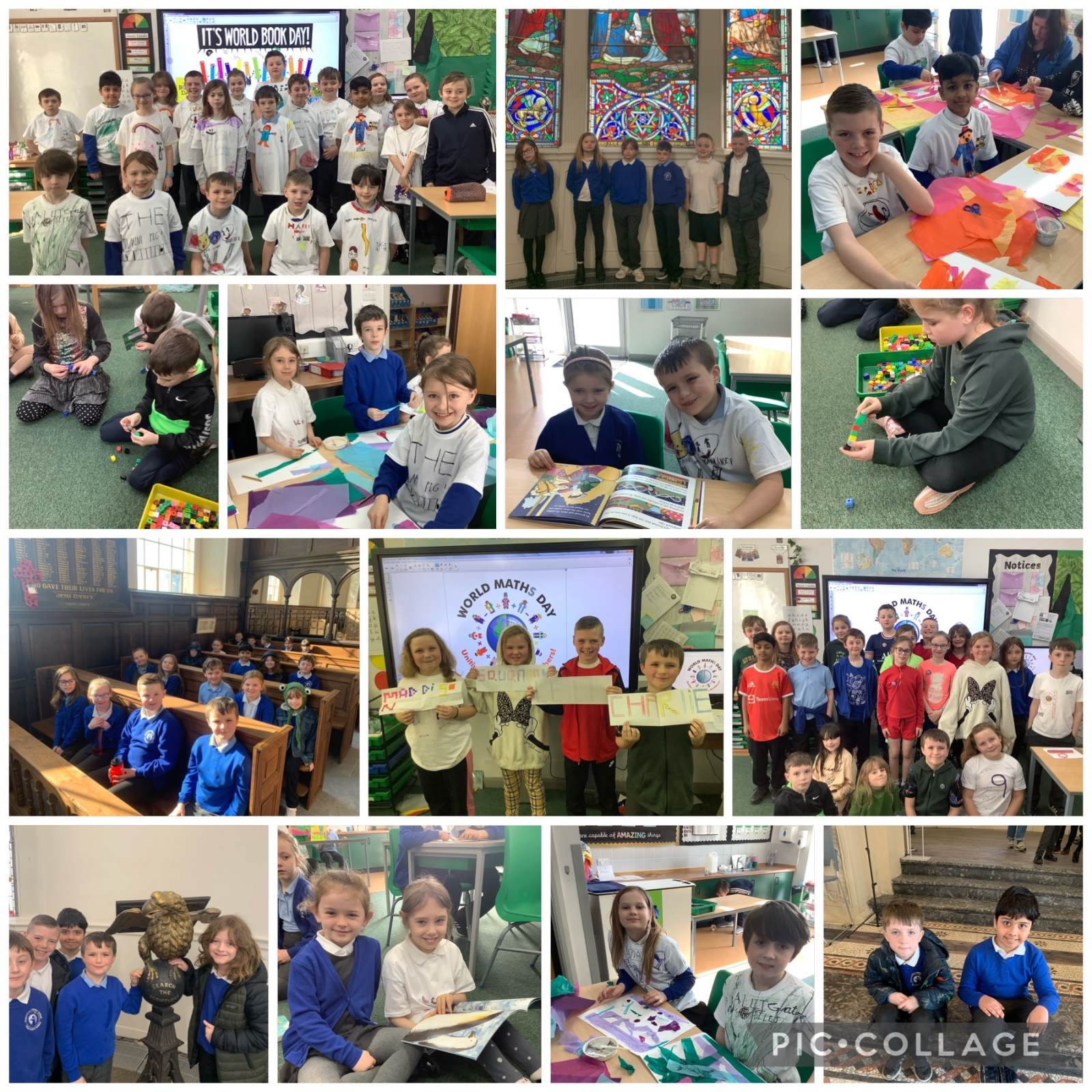 Year 4 had a fabulous handball session. They were taught lots of different strategies and skills to help them to shoot and defend. After completing some practice activities, they all took part in handball games where they had a wonderful time. Continuing our very physical day, the children all took part in an introductory skipping workshop. The children were introduced to lots of different skipping skills including single and double bounce, side swing and cross over. The children also had the opportunity to jump in and out of the long ropes. To celebrate the end of our half term history topic, the Year 4 children took part in a Greek Day. Some of the children came to school dressed as a character from Ancient Greek times and others came dressed in the colours of the Greek flag. In the morning, we all made olive wreathes for us to wear on our heads. We then wrote our names using the Ancient Greek alphabet. We learned all about the importance of Greek temples and the different styles of columns. The children were then given the challenge of making their own temples - using limited supplies of paper and card. The challenge included designing a temple that would be able to hold a given weight. In the afternoon, the children designed their own Greek pots using the authentic orange and black colours. We ended our amazing day by watching the film about the Twelve Labours of Hercules while the children tasted different foods that the Ancient Greeks would have eaten - including olives, figs, feta cheese and legumes. 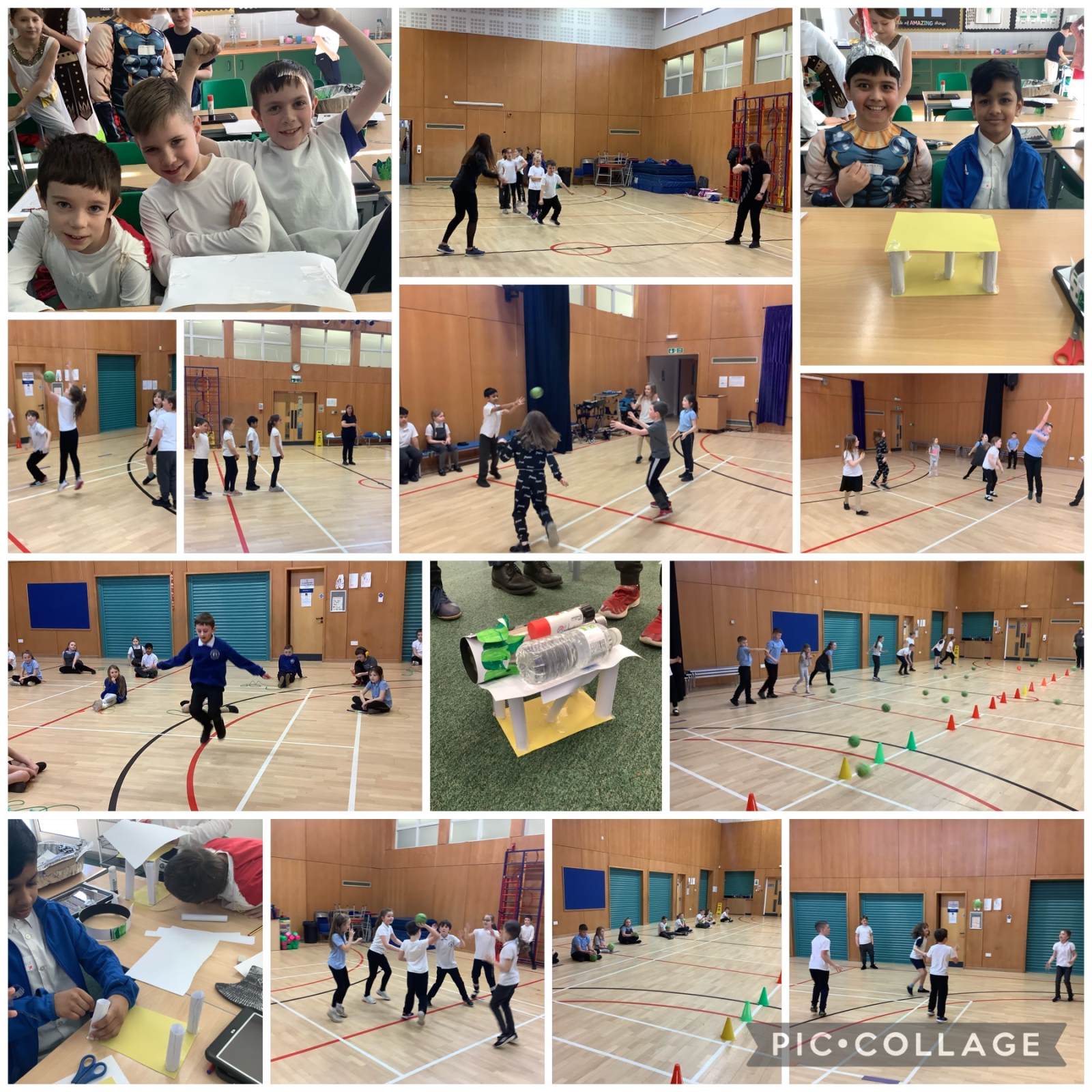 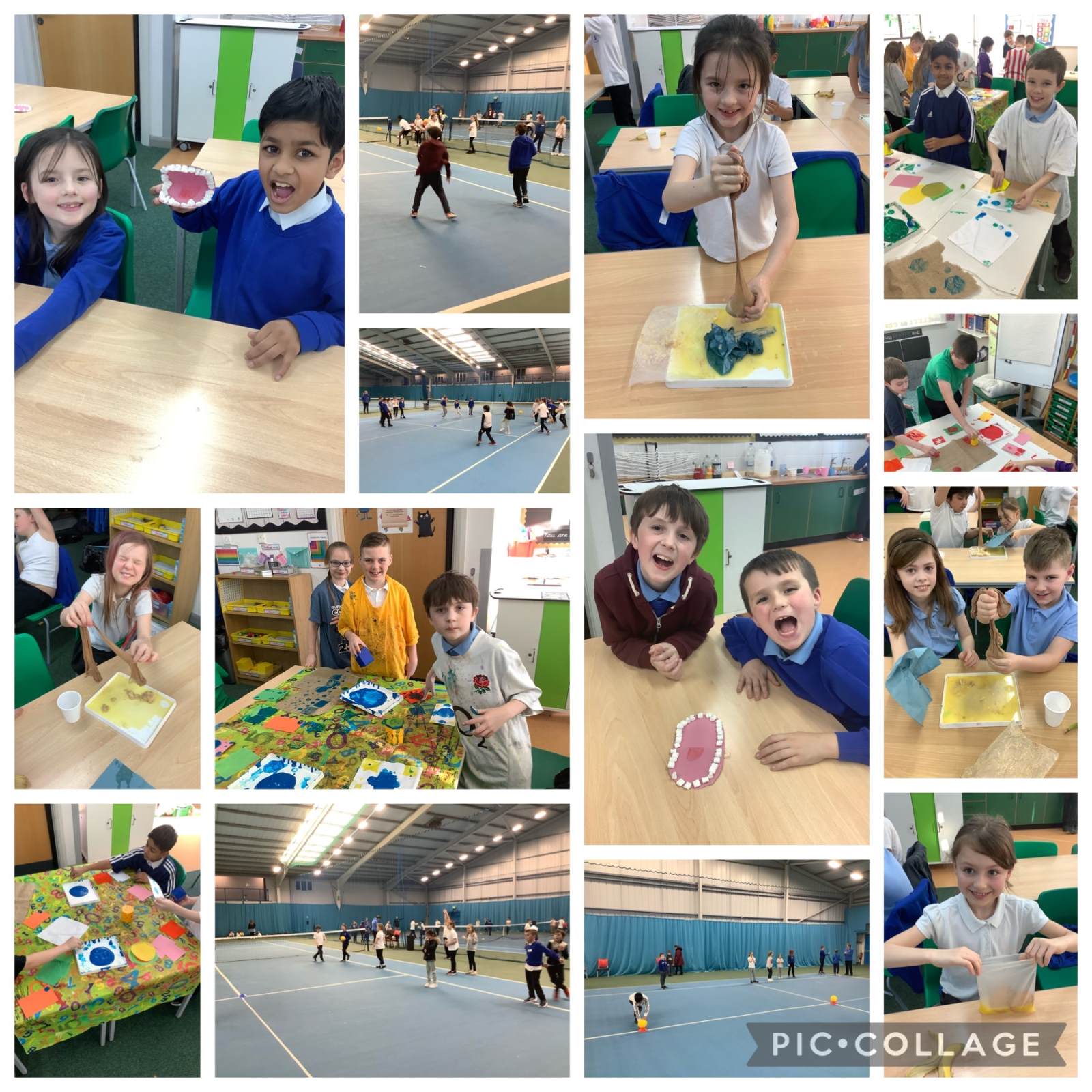 The children in year 4 had a pyjama day! They all came to school dressed in their pyjamas - and to make it extra cosy, they had hot chocolate with marshmallows and cookies. The whole of key stage two held their Christmas party today! The children had a wonderful time dancing, playing games and eating their party food. 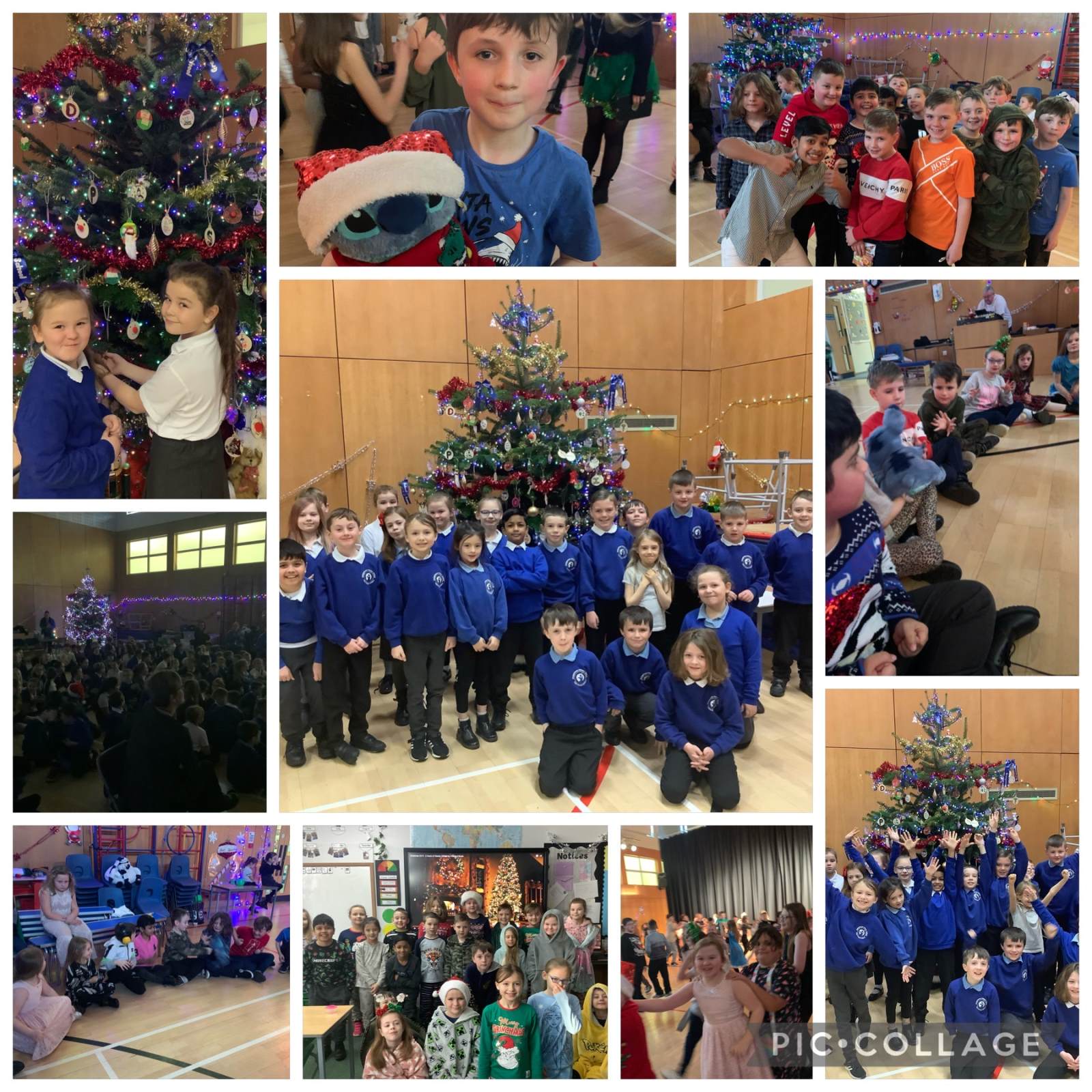 Year 4 had a very special visitor in November. Our class text was Pugs of the Frozen North by Philip Reeve and Sarah McIntyre. Before reading the story, we wondered what it would be like to take care of the sixty-six pugs that had been stranded in the Arctic. We thought this would be a great opportunity to learn all about dogs and how to take care of them. We didn’t have sixty-six pugs but we did have Bailey the pug! We were able to find out a lot of information about pugs by asking questions and hearing stories from his family. Bailey was on his best behaviour. He was very curious to get to know all of the children in Year 4. In DT, the children used their knowledge of a healthy and balanced diet to investigate what Arctic explorers eat and how the nutritional value may be different to ours. They created a recipe for their own sledging biscuits and discussed ways of making them more personalised. They were delicious! 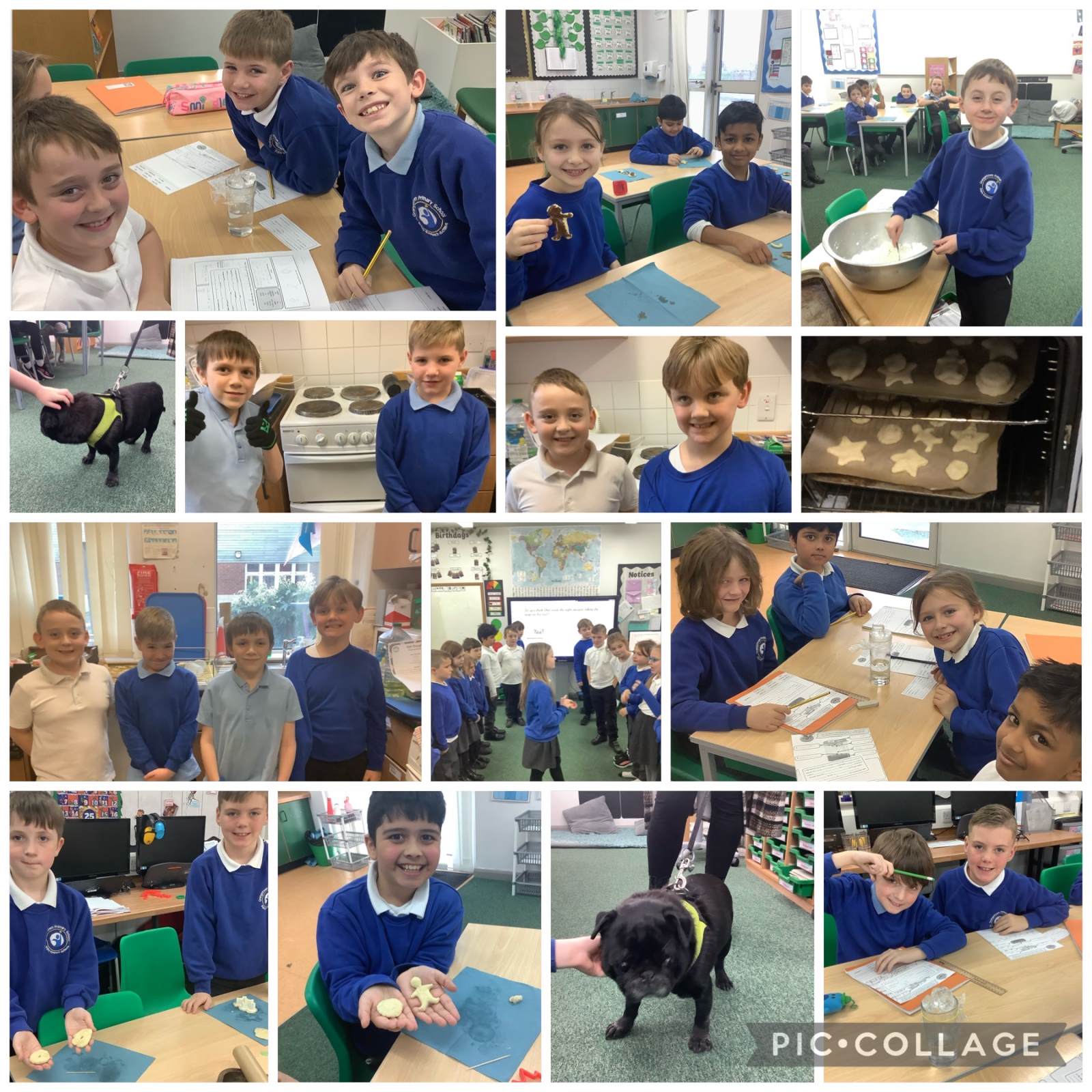 Year 4 have been learning all about the ancient Egyptians and explored Egyptian hieroglyphics. The children learned about how the ancient Egyptians would write in the form of pictures which represented the alphabet. They then learned that the Egyptians would write the names of their kings in hieroglyphics on a cartouche. The children then used their own designs to carve their names in hieroglyphics. Once the clay had dried, the children loved decorating their cartouches in coloured plaint. Year 4 also had the fantastic opportunity to take part in a Quicksticks Hockey workshop. The children had a wonderful time learning how to hold their hockey sticks correctly and control a hockey ball. They then dribbled the hockey ball between cones, stopping and passing it to a partner. The afternoon culminated in the children being divided into five teams and playing in matches against each other. In Science, the children continued learning about solids, liquids and gases and even created their own ice lollies by freezing fruit juice and created chocolate crispy cakes by melting chocolate. 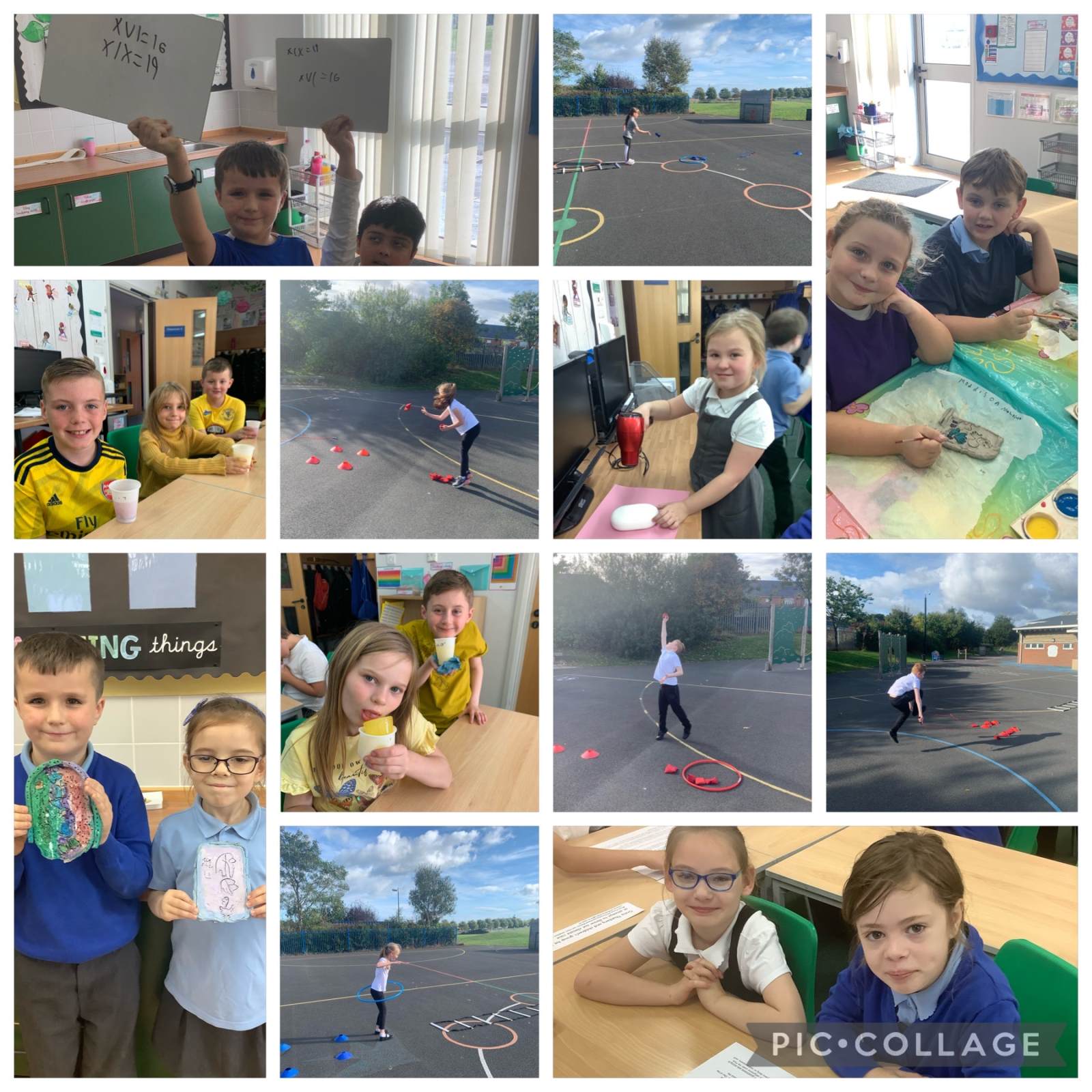 This half term, Year 4 HC have been learning all about Ancient Egypt. We have read two exciting class texts ‘Cinderella of the Nile’ and ‘Marcy and the Riddle of the Sphinx’. We were able to retell the story and create fantastic narratives using fronted adverbials, expanded noun phrases and lots of description for the characters and settings. In History, we have learnt all about the Pharaohs of Egypt and researched some of the most famous Kings and Queens including Tutankhamun, Rameses II, Cleopatra and Hatshepsut. We found out many interesting facts.  We are very excited to learn about the Ancient Egyptian hieroglyphics and create our own cartouche. In science, we have enjoyed learning all about solids, liquids and gases, carrying out experiments to find the weight of gas in carbonated drinks and testing what happens when substances are heated or cooled. We loved experimenting with slime and loved creating our own gloop using corn flour and water which could act as both a solid and a liquid. 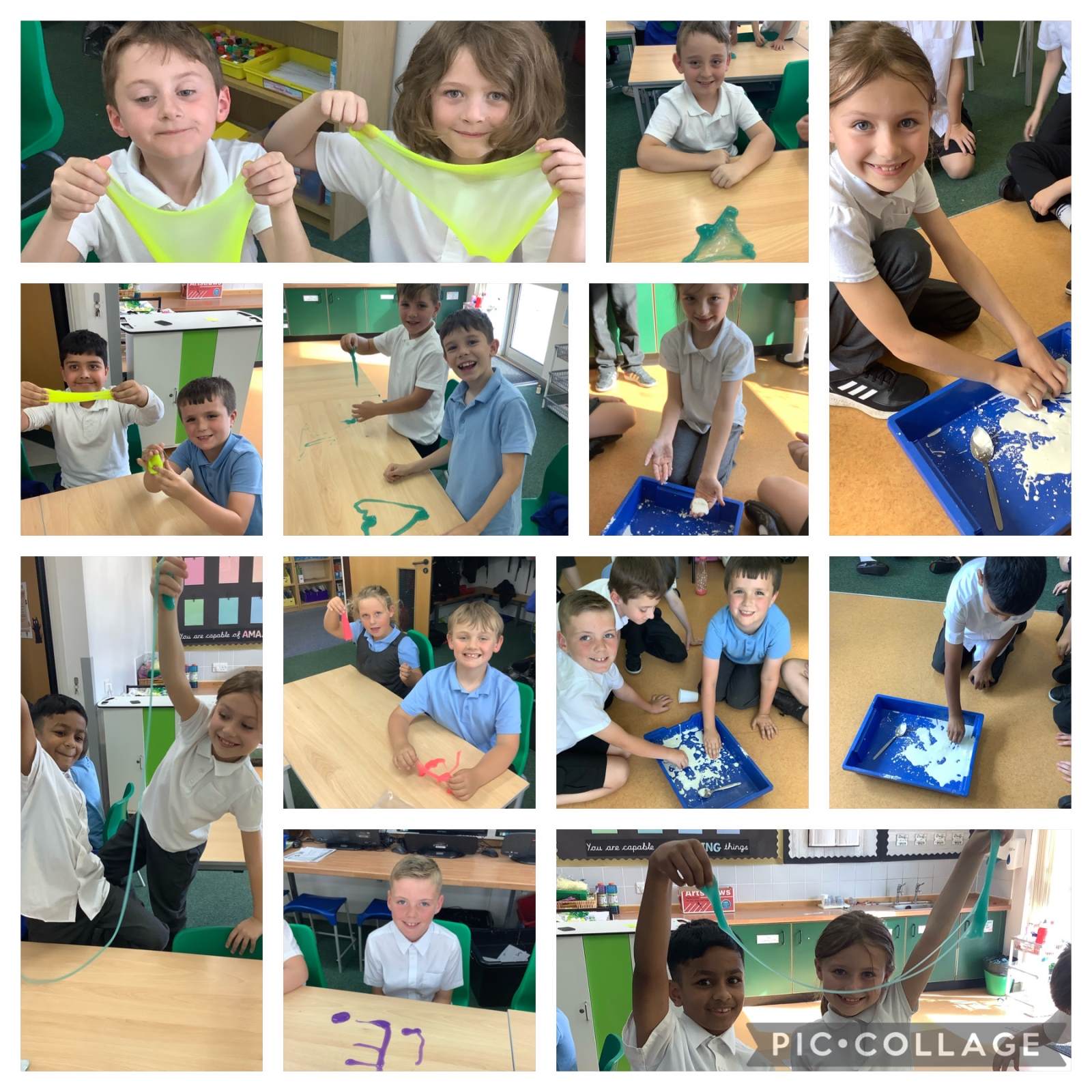